Since we're in the (entertainment) business of grading weathercasters, we thought we'd pass this along. The Weather Channel provided grades for the winter season to date. Chicago was given an A+. If that gives you some sense of civic pride, soak it up! According to TWC, 33 percent of Chicago's average seasonal snowfall has yet to fall.
Posted by Bill at 12:38 PM No comments:

Time To Catch a Breath

It looks like a relatively uneventful next week or so according to Chicago's finest weathercasters (if you don't count the bitter cold for the next couple of days). Perhaps an appropriate time for winter reflection.

What do you think of the winter so far? Weigh in with the poll question to the right.
Posted by Bill at 10:58 PM No comments:

The Blizzard of 2011: The Clockwork Storm

There were two impressive things about Chicago's just-concluded snow "event." One, the obvious: it was massive and historical (#3 for the record books). And two, it was about as accurately predicted a snowstorm as you're likely to see. While many are cynical of the weather media, feeling they're prone to sensational claims, this storm left Chicago's weather mavens looking pretty good.


The official total snowfall in Chicago was 20.2 inches at O'Hare and 20.9 inches at Midway. Here are the grades assigned by TCF (grading criteria can be found here):
WGN: A+ We're not easy graders, and an A+ is very hard to come by. That said, Tom Skilling and company nailed this storm from beginning to end. As of Sunday night, WGN noted that Chicago was in the 20-25" band. The final snowfall tally fell squarely in the middle of their final 16-24" range.

NWS: A The National Weather Service followed closely on WGN's heels, but was a bit less aggressive in going with the monumental amounts of snow that eventually fell.

WLS: A There's little fault to be found in WLS's performance.

WMAQ: A- Like most others, WMAQ ultimately established the proper snow range for the storm. However, on Monday night, they forecast "just" 10 to 15 inches, which was less than what actually fell.

WBBM: B+ Maybe we're being a little picky here, but WBBM was actually a little low in its snowfall estimates, with a final pre-storm forecast of 12 to 18 inches.

WFLD: C If there was one weather outlet that stood out, it was WFLD. Their final prediction was for 12-14 inches on the north side, which was considerably below what fell. And on Sunday night, when other outlets were talking about 20-inch snows and the prospect of a record-making event, they saw only "up to 12 inches."

A chronological presentation of the forecasts by weather outlets can be found here.
If you have friends or family in Minneapolis and Boston, or just want to see how groups of forecasters are faring in other cities, check The Minnesota Forecaster (our original forecaster evaluation) and The Boston Forecaster (new). You can also follow us on Twitter and Facebook.


A final reminder: There's nothing official or overly rigorous about our grades. While it's ultimately subjective, we do our very best to provide an objective assessment of the performance of local weathercasters based on information shared with the public.
Posted by Bill at 6:48 PM No comments: 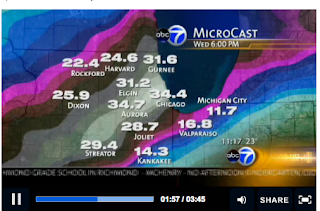 As the first flakes of the blizzard begin to fall, Chicago weather outlets are essentially universal in their predictions of a massive fall of snow. WFLD is on the relative low end with a forecast of 12-14 on the north side of Chicago and 18+ on the south side. WGN has the highest low-range estimate (got that?) of 16 inches. WLS aired a map showing 34.4 inches of snow for Chicago (see graphic) which they claimed wasn't really a prediction (yet they showed it anyway ... hmm...).

As of Tuesday midday, here's the latest and final predictions of what promises to be a memorable -- and quite possibly historical -- winter storm for Chicago:

For a progressive forecast showing each forecaster's predictions over time, click here. Follow us on Twitter and give us a thumbs up on Facebook. Remember to check back with us for forecaster grades, something we hope to issue Wednesday night or shortly after the accumulating snow has ended.

Email ThisBlogThis!Share to TwitterShare to FacebookShare to Pinterest
Labels: 2011 blizzard, Chicago blizzard of 2011

This Watched Kettle is Going to Boil

The snowstorm that's been watched for seemingly an eternity is hours away. The storm continues to follow the forecasters' collective road maps with great consistency. As of Tuesday morning, here's the wrap on the seemingly inevitable blizzard:

Approximately 18 hours from onset of the big storm, there's been no change in the forecaster consensus. It's hard to imagine so many forecasters predicting such consistently large snow amounts. If it's a big hype job, it's one heck of a conspiracy. As of Monday night, here were the latest forecasts:

Storm Potential Redefined (and so we have a sense of humor)

With all the nearly overwhelming amount of weather graphics you're like seeing or will see in the next 24 hours, here's one with thought might bring a universal smile. 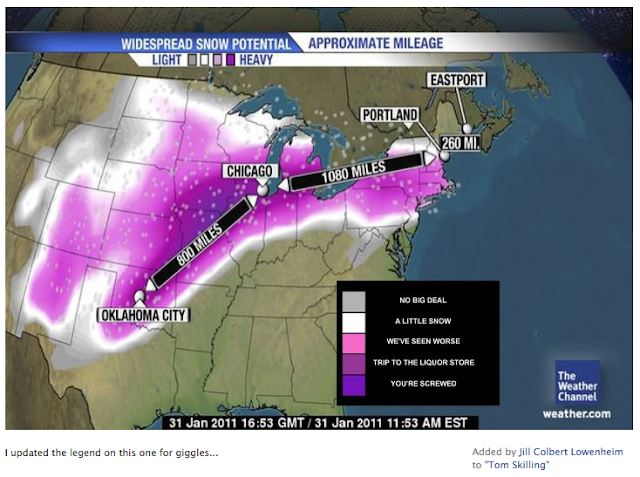 How would you grade the winter so far?